We first suspected you wanted more absence
when an occlusion ended too soon, a blunder
of light, the day’s live origins spreading

into these eagles silhouetted by the sun.
Fiber optics lengthened our reach, but our uncertainty
increased.  How does one lay a foundation?

Toddlers from the plains ran laps around us.
We were in the past: oblivion, billions.  You are the era
of emails from the moon colony which remind us,

after stitching a star in our eye, that we’re captured.
Your nemesis sketches of some stranger keeps us
quiet, smarting still from being mentioned.

W. M. Lobko’s poems, interviews, & reviews have appeared in numerous journals, including Kenyon Review Online, Sixth Finch, Hunger Mountain, & Boston Review. New work is forthcoming in Slice Magazine. His poetry has been nominated for a Pushcart Prize. His MFA is from the University of Oregon, & his home is New York City, where work on his poetry manuscript Kin Anthem and his novel The Quick Brown Fox doggedly continues.
Email ThisBlogThis!Share to TwitterShare to FacebookShare to Pinterest 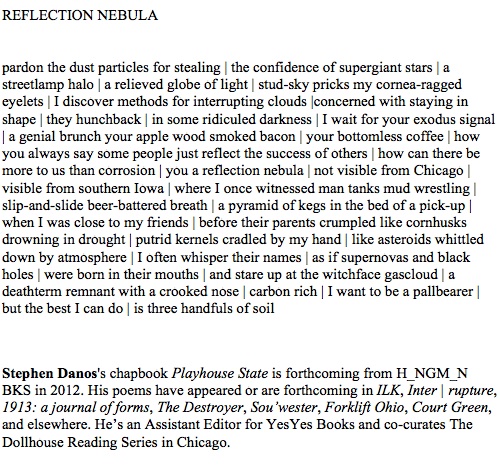 The world is white and moving

Birds play with a twig of millet
I make signals with my fingers
No one understands what I say
This is the way I want it, I get it

2.             Evaluate The Broken Things
Your hands make me dirtier
than I was at the beginning
I do not mind that at all, love
Luck provides me many things:
I have your cleansing mouth

3.             Re/Evaluation of Movement
There has been little, and only
on one side – meaning both
sides, but independent of each
other, yet obviously showing
the causal effect of your words

4.             Re/Evaluation of Motion
One of us is a defective clock
and the other is a boomerang
You think you know which
is which but I have promised
the silent cuckoo I’ll never tell


John Findura holds an MFA from The New School. A Pushcart Prize nominee and a guest blogger for The Best American Poetry, his poetry and criticism appear in journals such asVerse, Fugue, Fourteen Hills, Copper Nickel, No Tell Motel, H_NGM_N, Jacket, and Rain Taxi, among others. Born in Paterson, he lives in Northern New Jersey with his wife and daughter.
Email ThisBlogThis!Share to TwitterShare to FacebookShare to Pinterest

is no place to live

We carry, we name our own.

and we roll our pants up,

Stacy Kidd’s poems have appeared in Boston Review, Columbia, Eleven Eleven, WITNESS, and The Iowa Review, among others. Her chapbooks About Birds and A man in a boat in the summer were released this fall from dancing girl press and Beard of Bees.
Email ThisBlogThis!Share to TwitterShare to FacebookShare to Pinterest
Newer Posts Older Posts Home
Subscribe to: Posts (Atom)