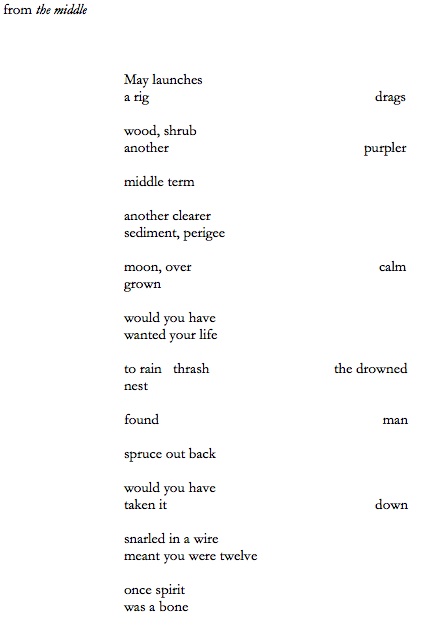 You who are mortal & alarming,
cut your coat out of your own back-
yard. Measure the curve of water with the bare
of your pale & cumbered bones & feel.
Time has already changed the present
so commas are shuddering into periods
of blue. Our longing becomes a shimmering
desert & to come back is alone. I see my face
again in the mirror & that bearing grin becomes
a cistern of disgrace I can’t let go. Is ceci n’est pas
une pipe a poem? I don’t know. In a dream we are
standing outside the Pantheon, & I wonder could Adam
have known his own loneliness? The poem is a dream
& the desert is blue in light of all this.

Daniel Scott Parker has never wrestled an alligator, but he has drunk water from the Okefenokee Swamp. His poems have appeared or are forthcoming in Spork Press, Marco Polo, The Stray Dog Almanac, and great weather for MEDIA. He lives in Chicago, where he is pursuing an MFA in poetry.
Email ThisBlogThis!Share to TwitterShare to FacebookShare to Pinterest

The grill kicks an orange hole in the season,
a spear into ribs,
a thief in aisle eleven: I've laid hands on those
massive midwest drills
+ imagined twisting one into a frozen lake til
water quit its solid
seasonal stubbornness to reveal blinking life
beneath, living stuff
which knows more ways to live with ice than I.
What I know
involves occasional cocoa, salt on the side
walk, recalled or fore
told equitorial stories, Costa Rica or warmer. The
salmon hums bright
pink in the December dusk + the dog believes
falling snow's a question
asked over and over again, he answers with barks,
sniffs anxious
where his two-hours-back footsteps have dis
appeared. The only
chance I've had so far I turned from the hole
in the ice, watched
friends offer vividity to its depth, the lake
a phone booth they
dropped the quarters of their youth into, hello...
we all steamed in dark
together. Who knew. They hooted, I hung back.
And what was it they
found or felt? That view, stars the endpoints
of distant icicles. They
emerged dripping, touched blue. It's like going
through, they said.
To where, to what. Who knew. Ellen loves me
despite that I've
never manned up + dropped myself into
measured harm
+ now the fish is ready, flesh flaky, out of place
in this cold: we
make meals from whatever we can, set the table,
count days till May,
pour the wine, dive in.

Weston Cutter's the author of You'd Be a Stranger, Too, a collection of stories, and the chapbooks All Black Everything and (0,0). He runs the book review website corduroybooks.com and has poems coming soon in diode and Copper Nickel.
Email ThisBlogThis!Share to TwitterShare to FacebookShare to Pinterest
Newer Posts Older Posts Home
Subscribe to: Posts (Atom)